music to go after the story: dead weather live 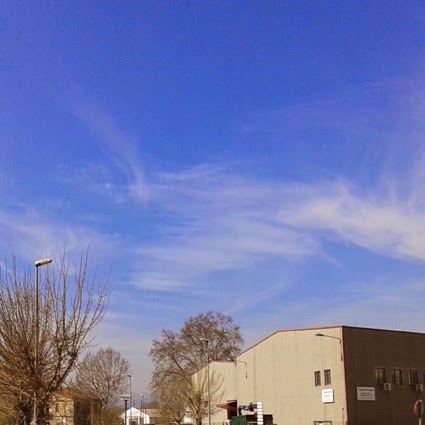 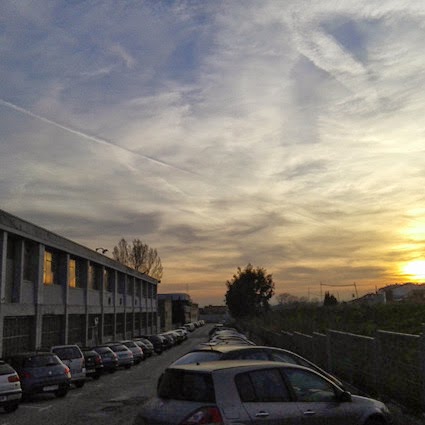 The subterranean traveller visited Neus Eddict on her roof terrace, where they sat watching the early spring sky fill up with chemtrails. This has been going on for three days now, Neus commented. Up in the sky planes are passing by, ten, twenty, once even thirty an hour. I've never before seen so many planes over Barcelona. Planes not destined for El Prat, you know, the high flyers. Never before have I seen them follow so many different routes. And all of them left this thick trail, much thicker than what seemed usual, a trail which wouldn't dissolve, which dispersed and thinned out like the rest of them but which stayed up in the air. On Sunday it was just planes in a blue sky leaving what would turn into a patch of fine lines, on Monday all these criss-crossing lines started to form a cobweb curtain over our heads and now on Tuesday it's filling up and weaving a blanket of clouds. Tomorrow there'll be rain, like the forecast announced on Saturday.

She pointed a long finger skywards, in this city never too far up. It looks real enough to you perhaps, but I'll tell you it is not. I've seen it forming, I know it's manmade and I know it's full of metals and chemicals.

Why would one want to do such a thing, the traveller wondered slightheartedly.

To block the sun from boiling us, Neus Eddict came quickly. There's not enough ice left on the poles and the mountain slopes to reflect the sunlight. And with methane now being released at ten times last year's quantities, temperatures are quickly rising above bearable levels. I mean, it's only March and it feels like godam summer. So they fill up the skies with metal particles which work as tiny mirrors, and with chemicals which bind water molecules to artificially enhance cloud formation.

You seem to know an awful lot about it, the subterranean said in a tone that could easily be held for admiringly.

Been reading like a maniac, Eddict eagerly admitted. There's so much to know, see? The less willing authorities are to clarify, the more information you need to keep up with your fact. She set fire to the joint she had been fixing and after a few deep drags burst out in an ear-splitting cough. In the end they come down and settle in your lungs, she told as soon as she was able to speak again, those metal particles I mean. So I smoke a lot of dope to help me get it out of my system.

Neus handed over with a smile. The subterranean traveller, reasoning that gonzo journalism requires for going along every turn your subject takes, naturally inclined.

Neus had been using the break in their conversation to glance over the three screens she had at a ready, her mobile phone, a netbook and an old pc, wrapped in plastic against the corrosive effects of nightly dampness. Nothing new there, she mumbled in an accidental manner. People think I'm crazy, you know. They say I'm a conspirationist. That I falsely believe in conspiracies. But how can one falsely believe if those conspiracies are true?

True, according to whom? The traveller preserving the observer role.

The conspirators themselves, of course. Rather, the individual ex-conspirator turned whistleblower. People who have been part of this grand scheme and those who have witnessed it and who couldn't bear having to walk round with their secrets any longer. Many of them have paid for their courage with their lives, others went into hiding and haven't as yet been found. You can find the facts on the internet, that is to say as long as people keep mirroring those stories. Hot news is rapidly removed, these days.

So it's all a grand conspiracy, the subterranean agreed, the weed needing him to feel his thoughts tread in harmony with Neus's.

Don't make fun of it, Neus Eddict warned. I guess I won't have to tell you our beloved democracy has become a gross joke. Every four years we vote in the next idiot and the morning after they happily continue doing exactly what we don't want them to do. Then who run our governments, you ask? The companies larger than a fair number of countries, of course. The really big ones. And since they all have become monopolists in their specific market segment, they have long ago decided that collaboration and knowledge sharing would be that more profitable.

They are all in this together, is what you'd say.

You bet I would, smiled Neus. They are interconnected, just as the problems they create. Take a look at what's going on in Ukraine. They organise a putsch so they can offer the country a loan and demand highly profitable austerity in return and at the same time they blow up tensions with Russia with the predictable outcome that the supply of oil and gas to Europe dries up, so they will finally have the incentive to make EU authorities stop their resistance against fracking. It's all one big machine, the state working for the corporations.

Neus Eddict didn't immediately answer. Her eyes were running over the screens again. The media are totally corrupt, she exclaimed. Is there one newspaper or tv station stating the obvious fact that Russia is merely defending its interests against US agression?

So how would you know?

Because the world is still slightly bigger than the fascist empire, dear. There are still websites dedicated to telling the other side of each story. Eddict again raised a hand heaven wards. Look at that sky, mate! Does anybody think they are doing us a favour? How can they imagine mass scale poisining will lead to anything good? She ran out of breath but she didn't cough.

They don't care, the subterranean traveller took quietly over, it's not their problem. They sell solutions and care not for the effects, the havoc wreaked. They've always been like that, it's just new technology which makes them go that much further. And don't forget the money, money of course being the greatest human invention ever, so it is vital to collect as much as one can. Whatever happens to human beings in this scenario I fear is of utter futility. Neus Eddict was suppressing a smile. So now you say they've come to poisoning us, deliberately I hear. Do they want us dead?

Neus nodded shortly. I know we're on a dead end, she gave with fear flashing her eyes, and it matters perhaps little how and when it will happen, but I kind of prefer to be eaten by the methane rather than getting poisoned by my own lot. To be insulted by these fascists, is so degrading.

As in the old song. That's right.

It would only start raining on Thursday, one day later than forecasted. Since then, a thick wet blanket has been hanging over town and northerly winds have dropped temperatures back to January levels. Was all this the working of those chemtrailing planes? For sure they would have been busy elsewhere also, but were nevertheless people, a select few people with lots of money and knowledge and influence, capable of changing the weather at their will? As he covered his throat and mouth with a scarf, the subterranean traveller suddenly felt very small and insignificant. Neus Eddict was right. Much better to die from methane overload.